In this week's installment of Tech History, I am taking a page (quite literally... well... several pages) out of my upcoming computer science textbook: An Introduction to Computer Science for Everyone.  This will be on the market soon -- keep an eye out for it.  But, in the mean time -- here is a sneak peak as we discuss the relevance of ENIAC: The World's First SuperComputer! 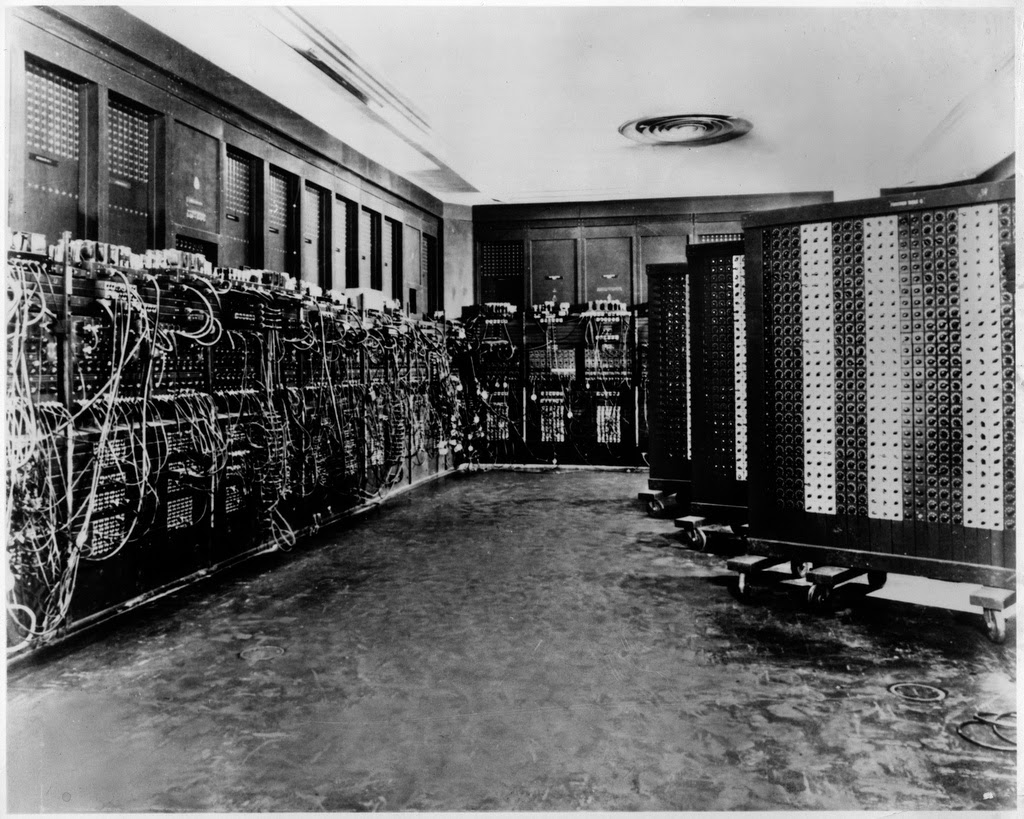 The ENIAC story is driven by governmental need.  When World War II began, the United States was woefully underprepared for military operations.  The army needed to develop and test a large number of weapons in a short period of time.  In particular, it had to perform a number of ballistics tests to create artillery tables—in essence, a book showing how far an artillery shell would fly from a specific gun, given wind conditions, the angle of the gun barrel, and so on.
Like the mathematical tables of Babbage’s time, these artillery tables had been created by hand, but by now the army already had some devices for assisting in calculation.  Called differential analyzers, they operated on mechanical principles (much like Babbage’s machines), not on electronics.  But something better was needed, in aid of which the army hired John Mauchly and J.  Presper Eckert, computer scientists at the University of Pennsylvania.  In 1946, the machine they proposed was called ENIAC, which stands for Electronic Numerical Integrator and Computer.  Like the ABC, it was truly a modern computer.
The term “modern” might seem too strong if you actually saw this machine.  Computers of that era relied on the vacuum tube, a device that resembled a lightbulb through which one electrical current can control another.  This controlling aspect was used to build logical circuits, because by itself one vacuum tube doesn’t do much.  Indeed, ENIAC required about 19,000 vacuum tubes to do its work, filled an entire room, weighed thirty tons, and drew about 200 kilowatts (that is, 200,000 watts) of power.  In comparison, a desktop computer purchased today would draw about 400 watts of power, which means ENIAC drew about 500 times more current, even though its actual ability to compute is dwarfed by the most inexpensive desktop computers of today.
What makes ENIAC so important is its reliance on electronics to solve a real-world problem.  There were as few mechanical parts as possible, although some mechanics were inevitable.  For example, ENIAC still used punch cards for input and output, and the parts that read and produced these cards were mechanical.  The vacuum tubes were built into mini-circuits that performed elementary logical functions and were built into larger circuits.  Those circuits were built into even larger circuits, a design idea that is still used today.
For decades the ENIAC was considered the first computer, but in the 1970s the judge in a patent infringement case determined that ENIAC was based on the designs of the ABC.  Other claims were also made, including those of Konrad Zuse, whose work in wartime Germany wasn’t known to the rest of the world for decades; and the Mark I, a computer developed around the same time at Harvard.  The question of what was the first modern computer may never be settled.
~~~~~
Bruce has worked in educational technology for over 18 years and has implemented several 1:1/BYOD programs.  He also has been a classroom teacher for various subjects.  Bruce is the author of five books: Sands of Time, Towering Pines Volume One:Room 509, The Star of Christmas, Philadelphia Story: A Lance Carter Detective Novel and The Insider's Story: A Lance Carter Detective Novel.  Follow Bruce's Novel releases by subscribing to his FREE newsletter!
Posted by Bruce A. Sarte at 2:09 PM