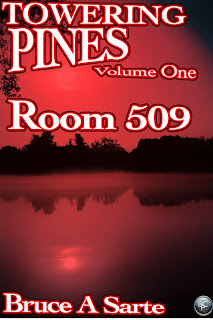 Towering Pines Volume One: Room 509 is a novel set in Ocean County, New Jersey.  The story follows the story of a teenage basketball star who feels his life is over when he is sent to military school to commute an aggravated assault charge.  Liam Rider's star quickly falls as he finds military school to be far more than he had bargained for.  He finds the cadets harsh and abrasive; and the staff less than welcoming.  When the guidance counselor tells him that he is going to be set back a year because of his remedial classes at public school, he feels like life couldn't get any worse.

When he meets Lisbeth Harrington, he feels like the tide may be turning in his favor.  She is assigned to help him acclimate to his new surroundings in the middle of a semester and he quickly realizes that she is the only friend he has at the school.  And when he begins having disturbing dreams of kids killing each other and seeing people in his room that aren't really there, he enlists he help to find out why no one has been assigned to room 509 for twenty years — and why he is being tormented by the ghosts of cadets past.

Suddenly pulled into the past of the historic school by nightmares of his own suicide, Liam and Lisbeth are catapulted forward into the
hidden history of ghosts, suicide and murder.  Can they solve the mysteries of the military school before Liam becomes the next victim of the paranormal murderer?

BittenByBooks.Com -- "grips the reader’s attention throughout."... "The suspense captures the reader until the very end." ... "plot was solid and easily intertwined the characters throughout the story." -- 4.5/5.00

OnlineBookReview - "It's Harry Potter for grown ups! Or... almost grown ups" ... "rivals the Twilight series for the teenage attention span in every way" ... "this is a page turner that mixed just the right amount of teen-angst with ghosts and magic" -- 9/10

Available on Amazon in Paperback, Kindle and Summer of 2016 in Audible Audiobook.