Warning: this BLOG post gets a little political, if you are easily offended then move on.  This post requires you to be able to think and not be narrow minded. 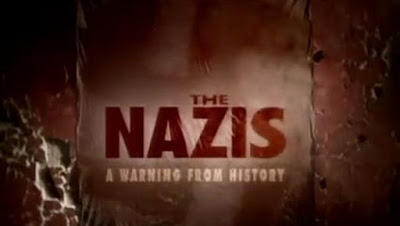 Whoa.  What does that mean?  In a nutshell, the history you learn in school may or may not be actually what happened on a granular level.  The big picture is usually fairly accurate like...  The Allied powers were victorious in World War II... the colonies won the Revolutionary War.... An Allied Coalition led by the United States invaded Iraq and Kuwait in 1990...  these things are true enough.  However, we are also told that whomever lost was irrevocably bad or evil... as an example, Great Britain fought to hold the American colonies and tried to beat them into submission for a time.  However, there came a point in the war when the King looked at the overall value of the colonies to Great Britain and decided that he was going to stop sending everything and the kitchen sink to North America to hold the land.  Yes... it is true.  While it is irrevocably true that the camp at Valley Forge and the Battle of Monmouth Courthouse was a turning point of the war and that Washington and his men are heroes -- it is also true that in the last 12-18 months of the war the Colonial Army was not fighting the same Great Britain they did initially.  And this leads me into the point of this BLOG -- we were taught that the Holocaust was 100% bad and evil, and that no good came from it.  Please do not misunderstand me at all: the Holocaust was an atrocity in human history that is unrivaled in its callous disregard for human life.  However, one must also recognize that there were scientific and medical discoveries that came from this disregard of human life.

What did I just say?  Did I just justify the Holocaust?  No, I did not.  What I did was recognize that there were positive things that came out of torturing and murdering innocent people.  And -- let me be clear -- I am not saying that the ends justify the means.  So... why am I writing this BLOG at all?  This is why... 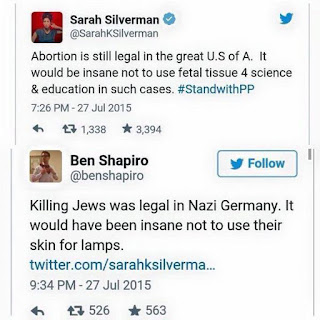 The comedienne and actress Sarah Silverman tweeted a justification for Planned Parenthood's practice of selling parts of aborted babies.  I am not here to debate the breadth and scope of this practice, but it is been proven to be true many times over so don't bother posting that it is a creation of the conservative spin doctors - it isn't.  In addition, I am not posting this to debate whether or not an unborn baby is a human or not.  This post is not here to allow you to sleep better at night knowing you are for "women's rights" because you justify the slaughter of human babies by calling them a fetus.  Different words don't change reality.  Accept that, for the purposes of this BLOG post, unborn babies are unborn babies.

So, Sarah says, "Abortion is still legal in the great U.S of A. It would be insane not to use fetal tissue 4 science & education in such cases" with the hashtag to support Planned Parenthood.  I won't type it, because I do not support them and don't want someone to accidentally think I do.  This sounds reasonable if the babies had donated their lives to science voluntarily, but they did not.  So we move on to Ben Shapiro's reply, "Killing Jews was legal in Nazi Germany. It would have been insane not to use their skin for lamps."  Ouch... right?  Last night I tweeted something similar in support of Shapiro's tweet saying, "Based on a tweet I just read, I think @benshapiro is my new hero... the lamp thing... boom."  I tweeted that because the honesty and brutality of what Ben Shapiro was suggesting was so dead on in relation to Sarah Silverman's tweet, that I just had to say something... even something as silly as that.  Little did I know that I'd be bombarded overnight with hundreds of replies, favorites and retweets -- and even a couple of new followers.  Great... but there were a few detractors from what Ben had said, and my response to it.  One in particular suggested that the analogy was not apt.  That, "Comparing saving countless lives to making an inanimate object out of Skin?" was not comparable.  Well, on the surface I agree.  The making a lamp out of human skin is not an apt comparison to the ability to use fetal tissue to potentially save lives in the future someday.  So let's break this down a little...

First, in Nazi Germany people were taken against their will -- and with their voiced objections -- and taken to work and death camps based on how well the Nazis thought they could produce for the cause.  When these people could no longer produce, they were either killed or left to die.  Many died of disease and starvation on their own, too.  But remember, these evaluations were done as they got off the trains -- people were sized up, separated and congregated based on quick evaluations.  This included those with obvious physical issues, deformities, things that made them unique or mental disabilities.  Many of these people were marched directly to their deaths, but in some cases these people were taken and used for medical testing.  And then there were the children... so many children were kept in the Nazi camps for no other reason then to test on them until they ultimately died.  All of this was legal, against their stated will -- at gun point.  Planned Parenthood offers many services to their clients, one of which is the practice of legal abortions.  This ends the development of a human life before it is born, they then take the non-living baby and sell it in parts to various people.  Let's assume for the sake of this post that they are all medical and/or scientific testing.  This is all legal -- and the baby never has a chance to voice its objection to being killed, or used for scientific purposes.

Second, we certainly cannot argue against the pros that come from scientific research.  Without it we would have no cure for polio, smallpox, yellow fever, malaria, typhoid fever, tuberculosis... the list goes on.  So in that, Silverman has a valid point.  Where her point falls apart is that it is a human being that is being murdered and tested on without their consent.  And in this country, you cannot consent to being killed (see the euthanasia laws across the country) -- so since you cannot give consent to being murdered, the entire operation falls apart before it begins.  And to bring this all back around to Shapiro's comment about a lampshade made from the skin of a murdered Jew during World War II.  First, I'd like to state for the record, that this remains more of a rumor than a fact.  To the best of my knowledge (and feel free to correct me) no proof of this exists.  Once in a while, one pops up -- and gets tested -- and ends up being sheep intestine or some other animal skin.  However, the rumor persists that the Nazi masterminds made a few lampshades out of the skin of murdered Jews.  This comparison to Planned Parenthood selling baby parts for research is obviously slightly off-kilter.  But it is not out of hand to compare the Nazi doctors and scientists to Planned Parenthood.  In fact, there is a direct correlation.  Because as the Nazis identified people as being medical testing subjects, they did -- in fact - perform medical tests on them... without sedation... while they were awake... often killing them.  This went for the old, middle aged, children and babies.  The Nazi testing was carried out for three different reasons.  First, they did experimentation aimed at facilitating the survival of Axis military personnel.  The second area was aimed at developing and testing pharmaceuticals and treatment methods for injuries and illnesses which German military and occupation personnel encountered in the field.  And lastly, they tested and experimented sought to advance the racial and idealogical tenets of the Nazi worldview.  What this meant was that they were doing anything that was necessary to keep their interests moving forward.  But out of this, came many advances and cures that we use today.  In fact, several of the diseases that I listed were cured by Nazi doctors as a direct result of the unethical testing and experimentation done during World War II.  Here is a partial list of the scientific good that came from the unethical practices in Nazi Germany:
And this is just a partial listing... there were other positive medical and scientific advances.  There were many tests on how to counter the impact of phosgene and mustard gas attacks -- if you know what these things do, you know how brutal all of this testing must have been.

In the end, the comparison Ben Shapiro made was partially for shock value, but made the apt correlation between Nazi medical testing and research and American medical testing and research.  And, one can extrapolate the idea that if you are at peace with what Planned Parenthood is doing, then you must also be at peace with what Nazi Germany did.  I have no problem with people who donate their bodies to science upon their natural death.  However, you simply cannot refer to abortion as a natural death.  And, as I stated above, if you are an abortion supporter under the guise of women's rights -- and that helps you sleep at night -- then this post will be irrelevant to you in a factual sense because you dismissed the premise from the get-go.  But... reality is what it is whether you choose to accept it or not... and abortion ends a life just as it has begun.  And the sale of tissue from a non-living human who did not consent to the test is immoral and wrong, whether it was done legally by Nazi Germany or legally by Planned Parenthood in the United States.

One should never look to what is legal to determine morality.  Murdering Jews was legal... murdering Africans in America was legal... slavery was legal... Blacks in America were deemed not-human, in fact, the United States Supreme Court held in the Dred Scott decision that blacks were not human in the same way as whites and that they never would be, women could not legally own property in America and so on and so on... laws change based on who is in power, just like teachable history changes... morality does not.


~~~~Bruce holds a degree in Computer Science from Temple University, a Graduate Certificate in Biblical History from Liberty University and is working towards a Masters Degree in American History at American Public University.  He has worked in educational and technology for over 18 years, specializes in building infrastructures for schools that work to support the mission of technology in education in the classroom.  He also has served as a classroom teacher in Computer Science, History and English classes.
Bruce is the author of five books: Sands of Time, Towering Pines Volume One:Room 509, The Star of Christmas, Philadelphia Story: A Lance Carter Detective Novel and The Insider's Story: A Lance Carter Detective Novel -- with a new book, Learn the Basics: Digital Forensics, due soon.
Follow Bruce's Novel releases by subscribing to his FREE newsletter!