Microsoft Office Late to the iPad Party? Apparently not... 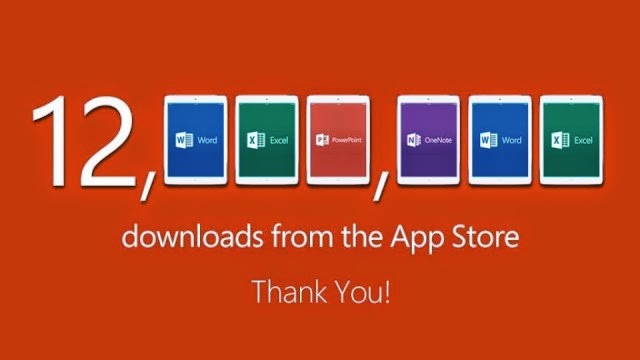 If you think Microsoft Office was too late to the iPad party... think again.  As of April 3rd, Microsoft says that the combination of Microsoft Word, Excel, PowerPoint and OneNote for the iPad has eclipsed 12,000,000 downloads.  Yes.. that is six zeroes.

If you think that maybe... perhaps they are inflating those numbers all you need to do is look at the Top Free Apps in the iTunes Store.  Yup.  Word, Excel and PowerPoint.  The decision by Microsoft to make these freemium apps certainly has spurred on the "download it in case I ever need it" people to go ahead and tap that button.  That is, you can download the apps for free, and view Word, Excel and PowerPoint in them -- but not create anything.  If you want to use Word, Excel or PowerPoint to Create, Edit and Save things, you will need to pony up to Microsoft's Office 365 subscription model.  You can drop $99 for one-year and you get 5 installations of Microsoft Office 365 for Windows, 100GB OneDrive storage (you'll need it) and/or Mac plus full use of Office for the iPad.  Don't want to pay all at once?  No worries, Microsoft will let you pay monthly ($9.99/month) but you really save ($30) by paying yearly.

What does this mean for the EdTech gang and use in the classroom?  It means that finally there is an alternative to using Pages, Numbers and Keynote that is actually workable -- and usable.  The days of, "Oh, I did it in PowerPoint and it doesn't work right in Keynote" and "I have Windows... I don't know how to use Pages" are over.  The classroom has a true common platform on the iPad to use.

This is a good thing.  And if the price seems steep to you ($99), consider that if you asked students to buy Microsoft Office for your class in the past, they'd pay between $99-$149 for Microsoft Office Student Edition.  Now, they get 5 installations of Office, plus easily accessible cloud storage big enough for anything AND the iPad apps.  So, think about it that way...

Bruce is the author of five books: Sands of Time, Towering Pines Volume One:Room 509, The Star of Christmas, Philadelphia Story: A Lance Carter Detective Novel and The Insider's Story: A Lance Carter Detective Novel.  He also has a new novel coming out in June 2014, The Kill Commission.  Follow Bruce's Novel releases by subscribing to his FREE newsletter!