Although I do not do it often, today I am going to post a few excerpts from my novels.  If you like what you see, take a moment and support an indie author and pick up my debut novel, Sands of Time for the holidays!  It is available in Paperback, Kindle and Audiobook formats.  Click here to check it out! 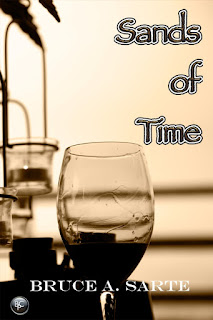 Description:
In one tragic moment, Sam Shepard's family was gone.... His wife and children are taken from him in a tragic accident following a bitter argument. Sam is left alone struggling with the mountain of guilt and the chasm of grief that he can only fill with alcohol. When a young, attractive woman comes to stay at his Inn, Sam thinks his luck might be changing. She brings him comfort and a kindred spirit suffering through her own loss. Is she the answer everything he has been suffering through for all this time? Soon after, Sam begins to have dreams about his dead wife and hallucinate her speaking to him. Has the alcohol finally gotten the best of him... or is it really the hands of death reaching out?

When we reached the door, Natalie gently pushed me aside and crouched down to the floor.  She reached inside her backpack and pulled out a small mirror on a handle, just like what you might see at the dentist’s office.  She slid it under the door, moving it back and forth slowly until she was satisfied.

“Doesn’t seem to be anyone in there.  Looks like a large open room with some lanterns burning on the walls.”  We both nodded to show our understanding, and she tried the door handle.  It turned easily, and she slowly pushed the door open into the room.

The room was large, perhaps half a football field in size.  There were many wooden tables throughout the large cafeteria-looking room.  Some of the tables had unlit candles on them while others were completely bare.  The walls were hung with what appeared to be old oil lamps, which were lit and giving off a soft amber glow.  The light was just enough to see, but not enough to be able to make out anything specific at any distance.  There were exits to the left, right and center.  None of them had doors, and they appeared to lead to other hallways.  I looked from one to the other, trying to discern the right way to go.

Where was Sandy now?  I needed some direction, now more than ever.
The vamprators were still buzzing violently, and I reached down and turned mine off.  Natalie and Pastor Paul followed suit.

“So,” Natalie began, “which way to go?”  She stood to my left with her hands on her hips, looking at the tables with some interest.  She took her hands off her hips, walked over to one of the tables, and picked up a glass.  She turned it over in her hands, noticing the traces of a rich red liquid that had pooled at the bottom of the glass.

“Any bets on whether this is wine?”
“I somehow doubt it,” Paul responded with a pained expression on his face.
“Which way?”  The words slowly rolled out of my mouth; I had no idea.
“Gang, I think this might be where we split up.  Nat, you head left, Pastor you go right, and I’ll split the difference in the middle.”
“Right,” said Natalie, “meet back here in 20 minutes?”
“Agreed,” Paul and I said at the same time.
“I think we should go one at a time, though,” Pastor offered.  “That way we can make sure the others are okay, at least for two minutes or so.”

We agreed to this—first Natalie would go, then Paul, then I would go by myself.  We all approached the hall to the left and entered slowly.  We peered down the hall together and saw that the oil lamps continued to light the way.  The passage continued to descend slightly, with steps about fifty feet down.

“Okay,” she sighed, “here I go.”  And Natalie slowly began creeping down the hall.  She looked back about ten feet away and gave us a thumbs-up.  Paul and I returned the thumbs-up and walked back into the room towards the hall to the right.  We slowly approached the hall, peered down and saw what appeared to be a mirror image of Natalie’s hall, complete with steps about fifty feet away.
The pastor began making his way slowly then looked back, nodding his head to indicate he was okay.
Now it was my turn.

Approaching the entrance to the hallway, I began to notice that this one looked very different from the others.  It was darker, barely lit at all.  Finally, I stood at a doorway that looked very different from the two Natalie and Pastor Paul had gone down.  This doorway didn’t lead to a hall—at least not directly— but stood at the stop of a tall stairway that appeared to be lit by very few oil lamps.  I couldn’t see the bottom of the stairway, so I put my glasses back on to try and see further down before I began my journey into the depths of this hellhole.  The glasses didn’t help very much—apparently they weren’t powerful enough to see that far.

I was a little troubled that Sandy had led me this far and then seemed to abandon me.  Again.  It made me wonder, who was Sandy trying to help?  Was it really me?  Or the kids?  Or maybe Khayman?  Natalie had said that when Emily was abducted, the Khaymans had really come for me.  Maybe Sandy was leading me directly into a trap that would only end up with me becoming one of them.  But Pastor Paul had said I was immune to that—or so he thought. Feeling like I had no other choice, I began my descent into the darkness that awaited me.  I took the stairs one at a time, slowly and deliberately, with one hand on the wall to the right of me.  About ten steps down, the glasses started to bring more of the stairway into focus.  And all I saw were more steps.  How far down did these steps go?  I only had twenty minutes to search and meet back in the main room, and I didn’t see any end to these stairs in sight.

But as I kept going down, step-by-step, I began to hear noises.  Strange scratching and shuffling noises were coming from below me.  I was walking right into the disturbing sounds.

Check back tomorrow for another excerpt from one of my thrilling novels -- and pick one up for your holiday gift giving!


~~~
Bruce holds a degree in Computer Science from Temple University, a Graduate Certificate in Biblical History from Liberty University and is working towards a Masters Degree in American History at American Public University.  He has worked in educational and technology for over 18 years, specializes in building infrastructures for schools that work to support the mission of technology in education in the classroom.  He also has served as a classroom teacher in Computer Science, History and English classes.
Bruce is the author of five books: Sands of Time, Towering Pines Volume One:Room 509, The Star of Christmas, Philadelphia Story: A Lance Carter Detective Novel and The Insider's Story: A Lance Carter Detective Novel -- with a new book, Learn the Basics: Digital Forensics, due soon.
Follow Bruce's Novel releases by subscribing to his FREE newsletter!
Posted by Bruce A. Sarte at 5:26 AM