Robert E. Lee surrendered what was left of the once vaunted Army of Northern Virginia to the United States and Ulysses S. Grant at Appomattox Court House on this day in American History, April 4th, 1865. 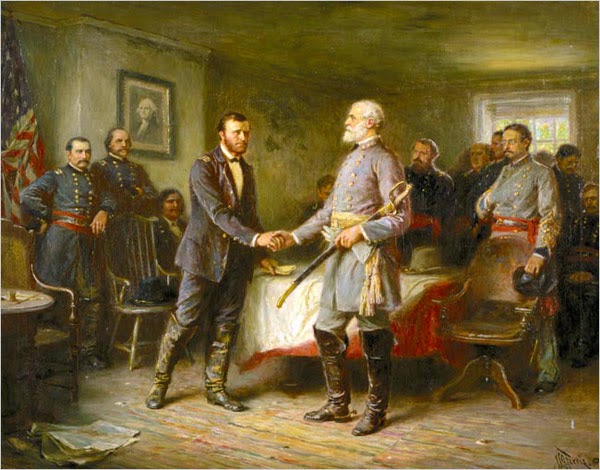 The people of Gettysburg, Pennsylvania didn’t receive the news until the following day, the morning of April 10th, 1865. Few northern communities could claim to have experienced the full spectrum of the horror of the Civil War as did the residents of Gettysburg. Like nearly every northern town, many of Gettysburg’s residents volunteered to fill the ranks of northern armies. Most of them made it home, but not all. Men like Fred Huber who was killed at Fair Oaks or Alexander Cobean who numbered among the slain at Shiloh, brought the tragedy of distant engagements home to an otherwise peaceful community. Unlike nearly every other northern town, Gettysburg played host to a major battle. The destruction and carnage of war visited Adams County in a manner that was all too familiar in the south, but virtually unknown throughout the loyal states of the North.

The news of the surrender of Lee caused jubilation and celebration throughout Gettysburg. The Adams Sentinel reported the event with a headline proclaiming “Bright Skies! Lee Surrendered and His Whole Army!” and described the ensuing celebration which included the dismissal of all schools and “Cheer upon cheer…given for our victorious Generals, our Government, the Old Flag, Adams Sentineland etc.” “This glorious news,” it continued, “is the precursor of Peace, and a triumph of our principles, which will tell upon the future of the great nation.”

The Civil War did not officially end that day or in that place, a fact those with more than a passing interest in the conflict are quick to cite, pointing to the April 26th surrender of Joe Johnston at Bennett Place, the May 1865 battle of Palmito Ranch in Texas or the furling of the ensign of the CSS Shenandoah in November of 1865, among a host of other “ends.” Yet, it’s tough to view the capitulation of Lee as anything other than the complete dissolution of the southern Confederacy.

Lee and Grant, both holding the highest rank in their respective armies, had known each other slightly during the Mexican War and exchanged awkward personal inquiries. Characteristically, Grant arrived in his muddy field uniform while Lee had turned out in full dress attire, complete with sash and sword. Lee asked for the terms, and Grant hurriedly wrote them out. All officers and men were to be pardoned, and they would be sent home with their private property–most important, the horses, which could be used for a late spring planting. Officers would keep their side arms, and Lee’s starving men would be given Union rations.

Shushing a band that had begun to play in celebration, General Grant told his officers, “The war is over. The Rebels are our countrymen again.” Although scattered resistance continued for several weeks, for all practical purposes the Civil War had come to an end.

Even if the war didn’t officially end that day, it has become the de facto conclusion for a four year long conflict that refuses to be anything other than complex and endlessly debatable. Even today, the word Appomattox conjures a feeling of finality…both for the Civil War generation, and for our own.


~~~~
Bruce has worked in educational technology for over 18 years and has implemented several 1:1/BYOD programs.  He also has served as a classroom teacher in Computer Science, History and English classes.  Bruce is the author of five books: Sands of Time, Towering Pines Volume One:Room 509, The Star of Christmas, Philadelphia Story: A Lance Carter Detective Novel and The Insider's Story: A Lance Carter Detective Novel.  Follow Bruce's Novel releases by subscribing to his FREE newsletter!