Although the Battle for Manila began on 02/03/1945, it wasn't until 02/05/1945 that American forces lead by General MacArthur put their full efforts behind the aid of the Filipino charge against the Japanese.  The battle lasted for a month and culminated in the blood bath that decimated the city of Manila.  It is considered to be the scene of some of the most vicious and bloody urban fighting of the second world war that seemed to have no end other than the one that occurred.  The Battle for Manila could be likened to a Greek tragedy, where all the main players know where the story is going but they are drawn inexorably to the bloody climax by external forces that are outside their control.  Ultimately, MacArthur's victory was the jewel in the crown of his conquest of the Philippines.


After the 1st United States Cavalry division pushed into the northern outskirts of Manila, they seized the bridge that crossed the Tullahan River.  This allowed the US forces to control egress in and out of the city, and allowed them direct access to the Malacanang Palace, which they recaptured.  Upon the liberation of the palace American forces were able to liberate the university in Manila which the Japanese had been using as a concentration camp to hold civilians prisoner.  Beginning January 4, 1942 the Japanese held over 4,200 prisoners -- of which 466 died in captivity and 3 were killed in an escape attempt.  They were ultimately freed by the 37th Infantry Division on February 6th, 1945.

On February 6, 1945, General MacArthur quickly announced that the American forces has re-taken Manila, but in reality the fight had just begun.  After the liberation of the University, American forces reported fierce fighting and strong resistance from the Japanese at every turn.  Day by day, inch by inch the American fighting force made more and more headway into the city.  The fiercest fighting within the city took place as the 129th Regiment crosse the Pasig River and fought to capture the steam-driven power plant on Provisor Island.  The Japanese managed to hold on fighting for three days before the 129th finally took the plant.

Initially, General MacArthur put severe restrictions on the United States use of artillery and air support in an effort to preserve the city and its civilians.  However, due to the Japanese hiding in buildings and using civilians for cover, by the 9th of February MacArthur lifted those restrictions and enabled the shelling of the city.  MacArthur said that there was no way to preserve the city and the lives of American soldiers, that the buildings would have to be leveled.

Today, the Battle for Manila is considered a national tragedy for the Philippines.  The loss of countless cultural treasures, government buildings, colleges, churches and other buildings that helped tell the story of who they were as a people.  And the buildings that weren't destroyed during the battle in 1945 were mostly demolished in the coming years in the name of rebuilding and progress.  In the end over 100,000 soldiers and civilians would lose their lives in on months time.  Indeed, the price of liberation for Filipinos was high. 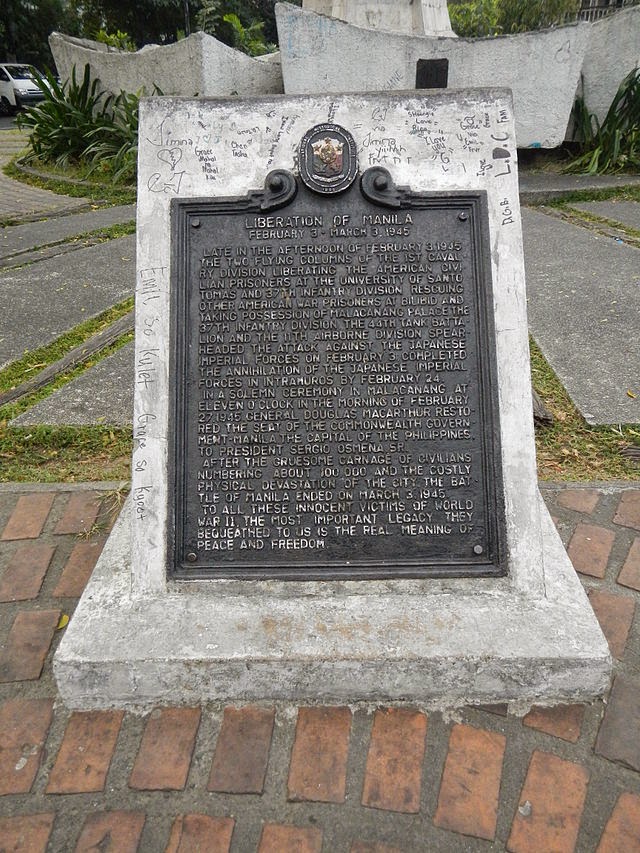 This monument stands in Manila today and says, "This memorial is dedicated to the innocent victims of the war, many of whom went nameless and unknown into a common grave or even never knew a grade at all, their bodies having been consumed by fire or crushed to dust beneath the rubble of ruins.  Let this monument be the gravestone for each and every one of the over 100,000 men, women, children and infants killed in Manila during its battle of liberation, February 3 - March 3, 1945.  We have not forgotten them, not shall we ever forget.  May they rest in peace as part now of the sacred ground ground of this city: the Manila of our affections."

~~~
Bruce has worked in educational technology for over 18 years and has implemented several 1:1/BYOD programs.  He also has served as a classroom teacher in Computer Science, History and English classes.  Bruce is the author of five books: Sands of Time, Towering Pines Volume One:Room 509, The Star of Christmas, Philadelphia Story: A Lance Carter Detective Novel and The Insider's Story: A Lance Carter Detective Novel.  Follow Bruce's Novel releases by subscribing to his FREE newsletter!